When Claude Allegre published his book L’imposture climatique (The Climatic Fraud) in 2010, he questioned mankind’s role in global warming. Today, few scientists would doubt that man has played a major role in climate change. It might seam obvious: since the industrial revolution, we have produced huge amounts of gases. Meanwhile, global temperatures have risen.

That said, over the last fifteen years, the rise in temperatures appears to have slowed or paused. This is little known to the general public – we sometimes call it a global warming hiatus. Several explanations have been proposed for this slowdown: it could be due to a cyclical reduction in solar activity or an increase in volcanic activity (which project atmospheric ashes that screens from sun radiation. Others suggest that a reduction of greenhouse gas emissions may have followed the Montreal Protocol in 1989 and caused the slowdown.

But how much do we really know about global warming and its causes and solutions? There are still so many variables that we do not fully understand. Just one example: the deep sea is still a mystery – it could very well be capable of storing energy in ways that we did not know were possible, with the potential risk that it releases it back in the future. So with what degree of certainty can we establish to what extent this warming (or the recent slowdown) has been brought on by mankind?

Any professor in probability or statistics will stress with his or her students the difference between correlation and causation. It is not necessarily because two things happen together that one causes the other. Therefore, the temperature increase and subsequent stabilization are not enough to scientifically prove that global warming is manmade. Especially since the physical laws governing global temperatures are difficult to understand although climatologists continuously make huge progress.

To prove a scientific hypothesis, most scientists would replicate a series of experiments, to show that same causes always produce same effects. But while it is possible to perform experiments in a laboratory, it is impossible to scientifically experiment at a global scale with the impact of gas emissions on temperatures.

This is why econometrics is particularly interesting in the study of global warming. Indeed, when applied to macroeconomics, econometric methods allow us to establish relationships without having to realize experiments – once you are in “real life” no governments in their right mind would conduct repeated mass scale experiments on their populations! Economists generally try to identify and understand economic laws by adopting a historical perspective, and then to play Candide and try to see what is recurrent and what is transient, to check whether “plus ça change, plus c’est la même chose.”

The Nobel Prize in Economics was awarded in 2003 to the British economist Sir Clive Granger for his econometric work on modeling long-term interactions between economic variables. The methodology he developed, called "co-integration", is used by researchers to isolate and identify economic laws.  For instance, this method has been used to establish the relations between inflation, output, interest rates and money through a statistical analysis of fluctuations (their co-movements) over the long term.

This methodology has been put to use in the analysis of interactions over a long period between anthropogenic emissions and climatic variations. The problem for economists or climatologists, however, is the lack of compatible data. Indeed, if we are able to measure the concentration of certain gases, and their so called “radiative forcing”, over centuries (e.g., via an analysis of their concentration in the layers of ice cores, in tree rings or via oceanic data) recent data from different sources are not all obtained in the same manner. Sometimes it’s impossible to reconstruct historical data.

In a forthcoming article in the journal Econometric Reviews, I proposed an alternative method to demonstrate these long-term relationships and identify the link between greenhouse gas emissions of human origin and the surface temperature of the oceans between 1850 and 2011. The bonus of using these econometric methods is that not only do they help us identify a long-term relation despite data source disparities, they also help us quantify it. In fact, I am able to show that the recent hiatus appears not only temporary, but that temperatures should caught up in the future with the recent missing increase. 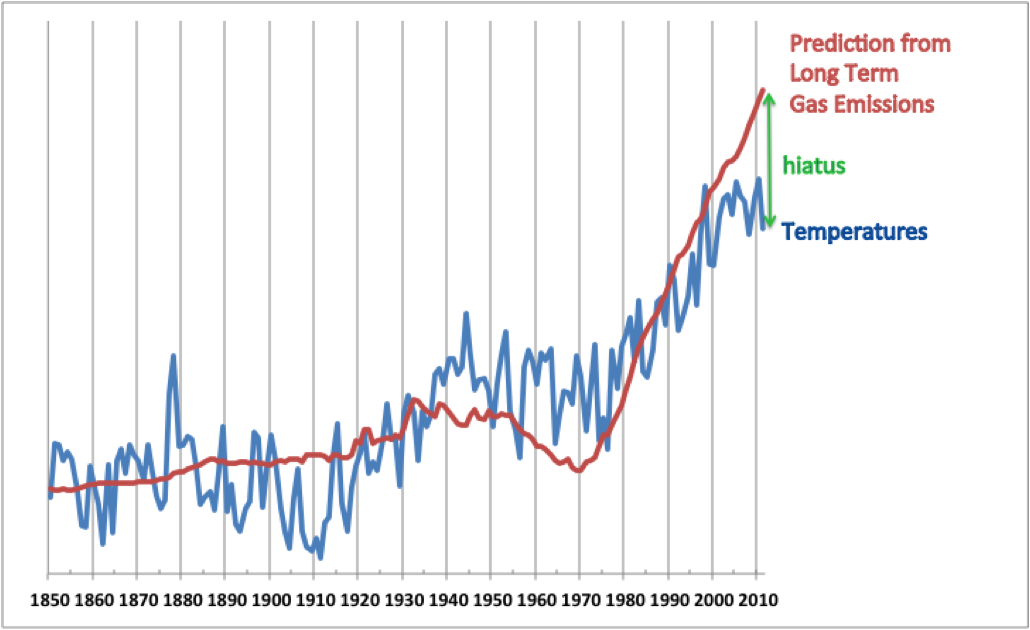 Political Risk vs. Economic Policy Risk: Which one really matters?

Board gender diversity and economic performance: Lessons from a controlled experiment

Gender Diversity in Central Banks: How May Things Evolve?

Understanding the glass ceiling in the accountancy profession: novel perspectives

Shedding Light on the Shadow Economy: what trade-offs should governments make?

How Can We Make Someone Work for Us?

The Rising Financial Imbalances of the Eurozone: Rebuilding in Unstable Times

Irregular Migration and Network Effects: What Policy Implications for Europe?

Who cares about the unemployed?

Europe needs the UK and its sense of economic direction

Anticipating in a World of Uncertainty: How to Responsibly Innovate?

Irresponsible Lending and the Crisis

Why we Need to Take Corporate Governance Back to the Fundamentals

How Easy is it to Spot a Genuinely Green Business?

Curbing Risk Without Killing the Market

Is the Crisis Pushing the EU Towards a More Federal Structure?

Philanthropy: Why do Companies Give?

To Bernard Colasse, the "soul" of accounting

Does Language Shape our Economy?

For Multinationals, Processes Shouldn’t be One-Size-Fits-All

The Customer is Always Right: Improving the Customer Entitlement Inventory

Business for good: what place does social impact have in corporate value creation?

Individual Support toward Environmental Policy: The Role of Trust

How can we make managers more socially responsible?

Why are Some Countries more Successful Tourist Destinations than Others?

Of backlash, beliefs, and attitudes: Diversity and disruption

Is it Worth it to Tell a Lie?

Supply Side Economics: A Guide for new converts

The Internet of Things is a Research Game-Changer

Taking off the wrapper: The Hidden Dynamic of Variable Annuity Funds

Women and the web: virtual networks and giving value to expertise

Is Today’s Business School Only as Good as its Research?

Intangible Assets: How Should Organizations Measure and Report on Them?