Previous studies have pointed to the link between watching TV and lowered physical activity, obesity and related adverse health effects. But what if watching TV could give us a newfound desire to get outside and practice a sport?

ESSEC’s International Observatory of Sports Consumption (IOSC) has released a study which begs that very question - Can the World Cup Encourage France to Move More? In partnership with Toluna, the IOSC asked some 13 867 people in France, Denmark, Sweden, Spain, Italy, Germany, the Netherlands, Poland, Romania and the United Kingdom about how much sport they practice vs. how much they watch on TV. What they found is surprising, and encouraging.

The World Cup: One of the World’s Most Watched Sporting Events

Major international sporting events are among the most widely broadcast in the world. Indeed, over the past 30 years, International Sports Federations like FIFA have dedicated a lot of time and energy into developing their marketing capabilities, media partnerships and sponsorship programs to ensure that their top events get global coverage.

Media groups around the world buy rights to World Cup coverage for ever increasing amounts: in 2014, these sales totaled more than 130 million Euros in France, and 140 million Euros in the UK, up from 4 million Euros in 1998 ¹ in both countries! In less than two decades, FIFA, like other leaders in sport, made ​​a stunning leap in terms of marketing its media rights. Today, the huge sums involved are fanning the fires of controversy related to taxation and the profits earned by the umbrella organizations. Taking all this into account, it goes without saying that these events have a serious financial and societal impact.

But is football really the world’s most popular sport?

Even though football is widely recognized as the the world’s most popular sports in terms of TV viewership, relatively few people actually play the game. This study found that while 77% of French people practice sport at least once a week, only 5% of them regularly practice Football. So if Football is still a popular sport, it is greatly exceeded by the more accessible sports that can be practiced in any public space (running, cycling), individually (swimming, fitness, gymnastics) or in pairs (tennis). Globally, Following FIFA’s information only 265 million people play football todayjust a little more than half the number boasted by basketball.

What does this mean for the sport? Ultimately, football organizations need to worry about inspiring new fans to actually play if they want to keep them emotionally attached to the game. Not only are lack of physically activity and obesity critical issues for societies on the whole, FIFA and other International Sport Federations will eventually find themselves faced with an existential crisis if they don’t act to encourage the positive link between watching the sport and actually playing it.

While holding these global events must be reconsidered in light of new social, economic and environmental issues, we should never forget that these events are also major opportunities to encourage physical activity and healthier lifestyle. Indeed, having a positive impact on the health of local populations could be one of their primary legacies. Plus, the findings of this study show that this could be a realistic goal for International Sport Federations.

Indeed, this study reveled that 16% of French viewers of the 2014 Olympic Games in Sochi felt more inspired to get active after watching the competitions on TV, including 7% who said they actually wanted to play more football! If the wide dissemination of the Olympic Winter Games inspired a sport as far from skiing, sledding and skating as football, we can only assume that hundreds of thousands of people around the world will want to play football after watching the World Cup.

And when you look at the number of people who actually watch the world cup, you realize its full potential impact: 3.2 billion people worldwide have watched at least one minute of the 2010 World Cup in South Africa. And 2014 in Brazil, the expected figures go well beyond.

The opening ceremony has already broken records in many countries, with more than 70 million viewers on average in Europe, almost 43 million in Brazil and 25 million in the United States. With such huge numbers, the World Cup offers a real opportunity to inspire people to play football almost anywhere in the world.

But in order to ensure the positive impact of sports media consumption, we’ll need to continuously measure this connection internationally. These measurements have not been sufficiently tracked in the past, and if we don’t measure this positive link, we’ll be unable to properly develop and promote sporting activities. ESSEC’s IOSC has developed the tools to contribute to this development and to the fight against sedentary behaviors. 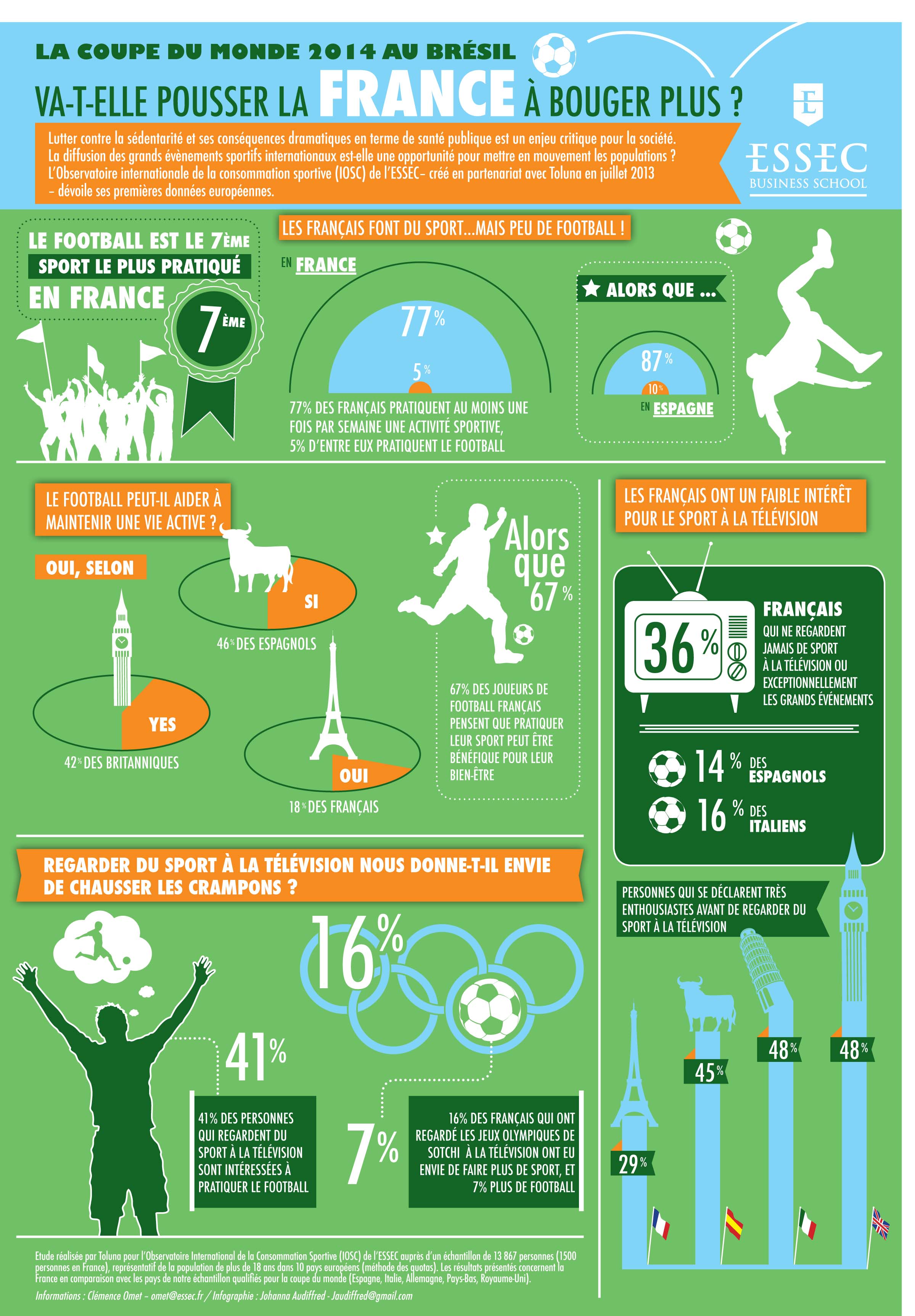 The Customer is Always Right: Improving the Customer Entitlement Inventory

Can you resist sweet temptation?

How Time Affects our Decisions About Risk

Three lessons that video games teach us about telecommuting

It’s not what you are, it’s the way that you’re primed to see it: Beauty and its impact on consumer behavior

What role will platforms like Netflix play at the Cannes Film Festival?

Are the Robots Taking Over?

The Yves Saint Laurent Museum: A Portrait of the Couturier as an Artist

Co-innovation: Get Your Clients Involved in the Creative Process

Let's Predict the Outcome of this Election

It's All in the Way You Tell the Story

Has Netflix Got What it Takes to Dominate in France?

Are pushy sales tactics contagious? Treat your business partners as you’d like them to treat their clients

David Beckham and the Qatari Vision

Do Academics and Companies See Eye to Eye?

Should World Cup Advertisers be Worried?

The Internet of Things is a Research Game-Changer

Would You Accept Bitcoins?

The US Elections and celebrities: The ultimate trump(ed) card?

Riding the Waves of Change

Big Data: A Tsunami of Information

Marketing: How to be David against Goliath