People who find themselves subject to criminal proceedings often dread media attention. This is especially true for economic actors, politicians, and celebrities. Indeed, media coverage of legal proceedings, while essential to democracy insomuch as it keeps the public informed, can carry with it serious negative repercussions. Its effects can be powerful and damaging since public opinion is largely influenced by the information and assessments that are disseminated by the media.

Compared to other major criminal cases, those involving recognizable personalities or brand names generally attract the lion’s share of the public’s attention. In these case, the public have come to expect that media outlets will play their role of counterweight, uncover corporate depravity, and help consumers make “informed” choices about where and how they spend their money. Consequently, journalists tend to feed into this expectation almost too readily: so bent on digging up the latest “scoop", journalists can veer dangerously towards sensationalism, and spread misinformation due to approximations.

The media indeed has the power to impact the administration of justice, and it is obviously very serious to be judged prematurely by the press. Judges and juries are not immune to the influence of public opinion and media pressure can make impartial decisions more difficult. In the US and the UK, the risk of media interference is taken very seriously, to the point where procedures can be postponed if the judge considers that the media bias prevents fairness.

Media bias can also impact the brand image and personal reputation of implicated firms and personnel, passing judgement before the jury has reached its decision. The justice system is turned on its head, as it were: first the punishment, then the trial! The personal consequences of what is commonly referred to as "media lynching" can be dire, both psychologically and socially, especially if the accusations are baseless. Careers can be irreparably damaged and brand names forever tarnished by these kinds of premature media judgements, even when the cases ultimately result in an acquittal.

The risks that the administration of justice and the rights of defendants will be negatively impacted are exacerbated by the fact that the media and legal professionals speak two different languages. The judicial discourse, for its part, is a complex language that unfolds according to the rules of criminal procedure. Media discourse, meanwhile, doesn’t follow the same rules and speaks to a different set of stakeholders: victims, prosecutors, defendants, lawyers ... The journalistic storyline is free to diverge from legal standards and the requirements that usually govern criminal proceedings. It is not the media coverage of court cases in itself that is the problem. The problem lies in how the facts and procedures are presented. Indeed, because journalists don’t follow the same rules, the story presented by the media can go directly against the objectives and interests protected by the law. However, given the primacy of the freedom of the press, you often have the feeling that the media’s law trumps other legal considerations.

A first problem is in this regard is that journalists are more interested in fresh court cases than they are in their legal conclusions. The defendants take the headlines while the trials and judgments are more discreetly treated by the media. This is because the accusations and doubt that surround newer court proceedings arouse more interest than the innocence or guilt affirmed by judges. Indeed, over 90% of published press articles focus on the initial stages of the proceedings (investigation and instruction), and less than 10% of the articles report the trial, decisions or actions brought as a result of the trial decision. There is thus a problematic media imbalance.

A second important issue is the treatment of ‘presumed innocence’ by the media. Too often, reading newspapers can give the impression that a defendant’s right to be considered innocent until proven guilty has been violated. Journalists speak of "murderer" and "criminal” before a case has come to its legal conclusion, to simplify their storytelling. In reality, this is nothing less than a reversal of the presumption of innocence. Journalists should also be more vigilant about the risk of being exploited by a defendant’s competitors or rivals. Those pressing charges against individuals or businesses are not always disinterested.

If the legitimacy of legal media coverage is widely accepted, the treatment of this type of information can clearly still be problematic. Should we then submit journalists to stricter rules when they cover cases under legal proceedings? We believe that the legal rules and ethical rules that apply to the profession are a relevant and appropriate framework to promote a balanced treatment of criminal cases. However, if the rules are to be known and observed, this will undoubtedly require better training and an improved system to guarantee accountability. Otherwise, cases like the "Alègre-Baudis" or "Buffalo Grill" affairs will reoccur. 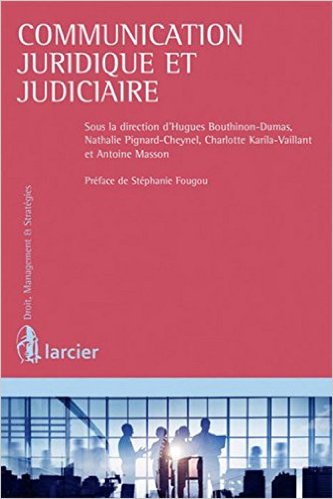