Today, the digital world has overrun our lives. We use our digital devices not only to communicate with others, but also to work, eat, get around, and entertain ourselves, amongst other things. Who can honestly say they’ll go an entire day without their smartphones, or without connecting to their favorite social networks? Numerous studies have shown that the average smartphone user checks it  between 150 and 220 times a day! Naturally, Generation Y is the most affected by this growing addiction, and especial students who rely on the digital world to work in groups and network with fellow students.

Therefore, we decided to analyze how Michel Serres’ "Thumbelina" generation, and especially students, imagine their lives in the cities of the future. This new study - DIgital & the City - conducted by the ESSEC Chair for Real Estate and Sustainable Development, aims to illustrate how French students see their lives in the city of the future, and get to the bottom of some widely accepted assumptions.

What these students tell us about their relationship with the digital world is surprisingly paradoxical. Straight from the horse’s mouth - the young members of the “hyper-connected” Generation Y - our findings should be of great interest to large telecom operators as well as those who take an interest in what we call  the the “smart city” of tomorrow, where telecommuting, e-commerce, and big data promise to change the way we live.

Another example: while it is generally assumed that telecommuting and e-commerce will explode in the coming years, neither turned out to be popular with respondents: only 11% believe they will work mainly from outside the office, and only 22% want to shop online in the near future. Finally, an overwhelming majority (77%) of respondents believe that the digital world is too present in the lives of their generation. But ironically, only 47% believe that it is too present in their own lives. Overall, they feel that digital devices have invaded the lives of the young French students around them, but that they themselves have been able to be reasonable and keep these symbols of modernity at a healthy distance.

The second major lesson of our study: the allure of the big city is as strong as ever. Respondents want the fast-pace excitement, array of amenities, and job market that the big city can offer. However, our study nuances this idea: while 39% see themselves working in a big city in the future, small and medium sized cities are not far off, collecting 36% of responses.

In light of this “comeback”, we should ask how close and well connected are these smaller cities with the closest major metropolitan area? Or, how far are they from the closest business district? If they are far away, it implies that telecommuting and e-commerce will become all the more attractive. These conditions will need to be met if small and medium sized cities are to offer the quality of life that individuals expect from them. Therefore, these finding raise serious questions in terms of urban planning.

The draw of medium-sized cities is connected to the enduring allure of city centers, whether as a workplace (47% want to work ‘downtown’) or as a place to shop (53% want to do their shopping there). Far from the old ideal of a house in the suburbs not far from the shopping center, students would rather benefit from the amenities of a city center, even if that city isn’t a very large one. The annoyances of the metropolitan lifestyle are well-known: high cost of living, lack of space and nature, pollution, congestion, stress etc. (see our previous survey). However, the draw of the medium sized city and this generation’s enduring love of ‘downtown’ aren’t necessarily contradictory.

Finally, this study reveals a third enduring misconception: while media outlets regularly report on the French "brain drain" problem, nearly seven out of ten French students (69%) say they would prefer to live in France than leave to go abroad.

A majority of students prefer to live France, are much less addicted to digital devices than we might have previously thought, and are surprisingly attracted to medium sized cities. Is Generation Y… conservative? Their ideal lifestyle, in any case, is hugely different from what the media would have us believe. They don’t love the big city, telecommuting, or their digital devices as much as we might have thought. Rather, they may even see the digital world as an object of concern. These surprising conclusions invite us to reconsider the idea of a fully digital life in the city of the future. 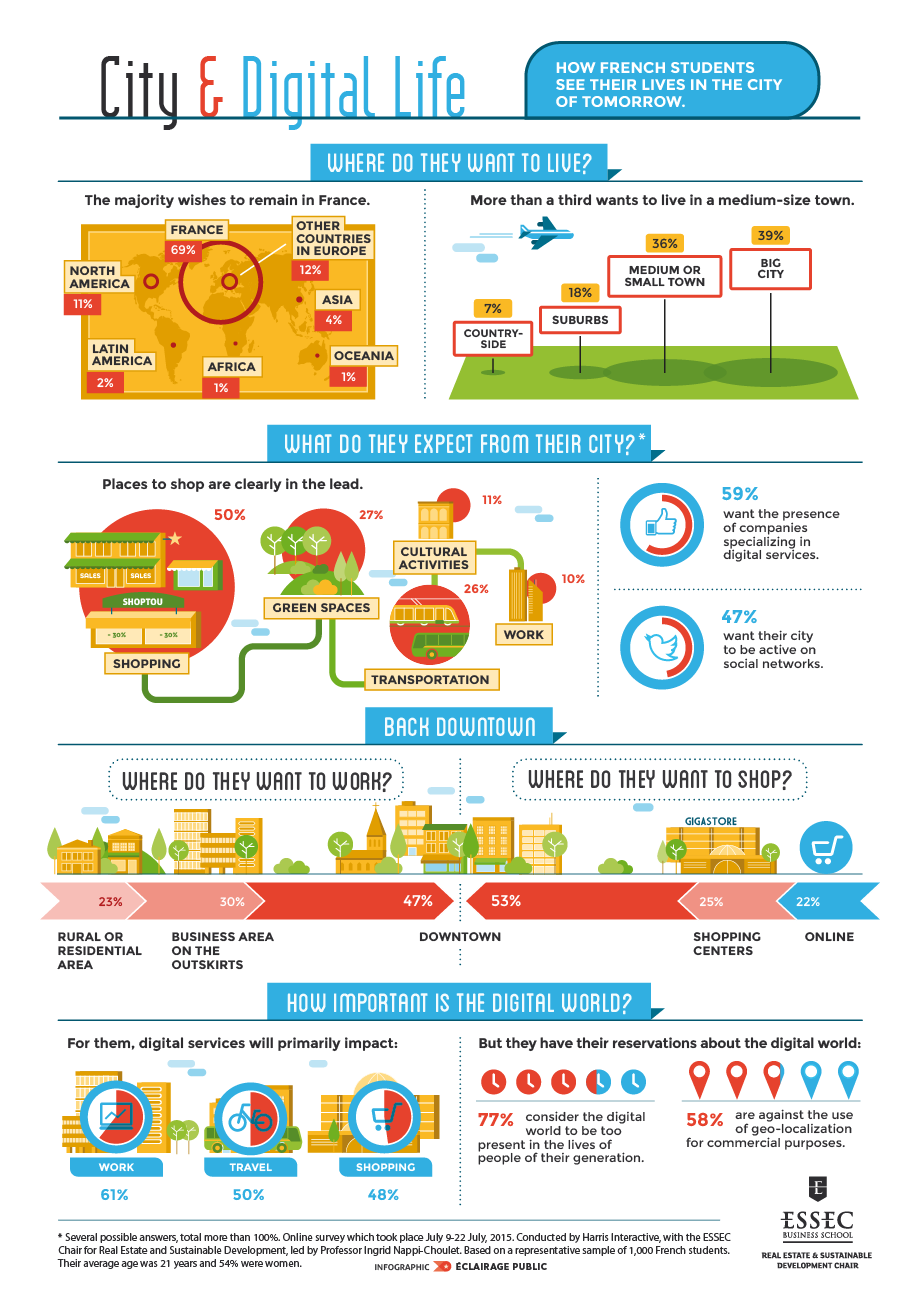 A 10 step guide to negotiating a job offer

Paris 2024: The Urban Legacy of Mega-Events, Explained in 3 Minutes

Real Estate and the Urban Landscape of Tomorrow

Where do tomorrow's managers want to work?

Women and the web: virtual networks and giving value to expertise

Working in Greater Paris: students imagine the office of tomorrow

What role will platforms like Netflix play at the Cannes Film Festival?

Julian Assange, WikiLeaks and the Evolution of American Diplomacy

E-lobbying: learn to use the web to influence decision-makers

Can Apple keep winning the game with a late mover strategy?

Social entrepreneurs, don’t lose sight of your benefactors as you increase the impact of your organization

“Uberization” and the rise of the service economy

Being part of the territorial consultation process takes courage

Social media and the stock market

Women and their Relationship to Power

Philanthropy: Why do Companies Give?

HOW SOCIAL ENTREPRENEURSHIP COULD DRIVE DEVELOPMENT IN NORTH AFRICA

Can “Economic Patriotism” Exist at the European Level?

Croatia in Europe and the Focus of Power

Lobbying, Public Opinion and the Rise of the Digital Democracy